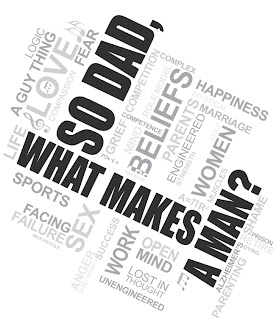 "So, Dad, What Makes a Man is the well-told story of Tom Peery’s journey toward maturity and self-awareness. The universality of his journey, combined with his unique experiences along the way, makes his story both compelling and instructive."


"This book opened my eyes to challenges which men experience to becoming spiritually and emotionally aware. The powerful stories of initiating by brutality, viewing women as objects of conquest, training to kill, and compulsive corporate competing still stick with me. This one man’s struggle to learn to feel and relate is described with the analytic precision of his engineer’s mind."


﻿
"I want to get this book into as many men's hands as possible."


﻿
"I just finished your book and how I can relate to the voices, the chorus in my head! And so much more....your relationship with Mance....the struggles leading to deeper growth and love....yes, my husband and I share that, too. It's amazing how many of the resources you have used have also been significant in our lives. Your book tells the story of our generation!"


"This book is captivating and has offered a time for reflection for me. How was my career the same as Tom’s? How was it different? Why? Was I driven by the same things? Have I made some of the same personal mistakes? As a retiree, I can say Tom’s book is not just about him."


A Voice of Reason: From Raw Ego to Real Grace
... a review of the new book, So Dad, What Makes a Man by Tom Peery
– by Fannie LeFlore, MS, LPC, CADC, Psychotherapist and Social Entrepreneur ,
Editor of M. Scott Peck’s The Road Less Traveled and Beyond, Milwaukee, Wisconsin

Those informed and inspired by the late psychiatrist M. Scott Peck’s ground-breaking, 1980s-bestseller The Road Less Traveled will welcome the themes in So Dad, What Makes a Man, a new book by Tom Peery that covers wide-ranging ground about personal growth into manhood, in refreshing ways, given the profound need for diverse voices of reason to promote positive messages.

Peery, a former engineer now retired and living in Houston with his wife, no longer neatly fits a category of what some may define as typical white, Boomer-generation corporate man. Nowhere is this more apparent than when he acknowledges how the first half of his life was spent participating — through tacit support or silence — in much of what he now laments about America and the direction we’re heading. He is deeply concerned about the widening gap between rich and poor, ineffective political systems and quasi-leadership by men in public office whose personal gain matters more than problem-solving to promote progress for this country.

In a January 2012 article in the online publication Truthout, the long-time progressive media commentator Bill Moyers wrote: “The lack of civility and common sense that has paralyzed our democracy. . .the corrosive influence of money in politics – we’re in a tailspin with little hope for a course correction from our elected leadership or corporate-dominated media. The need for voices of reason, simple and eloquent, has rarely been stronger.”

Peery is among the voices of reason. Although So Dad, What Makes a Man seems limited in scope due in part to its title and autobiographical nature, the book actually covers broad subject matters relevant to navigating adulthood in general. Peery’s well-paced stories show that asking questions helps us take personal responsibility in seeking solutions that allow us to grow and mature. This is applicable as we navigate and overcome various challenges in life, whether self-imposed or due to upbringing and cultural influences.

Through anecdotal recollections of his personal and professional experiences, Peery shares how his high school buddies taught him about sex, what military basic training was like as well as multiple challenges – ethical and practical — involved in climbing the corporate ladder as a professional man.  He informs readers about how he internalized anger based on what he learned from his father, and how easy it was to place blame or project issues onto others in an effort to soothe his own ego.
Married for thirty-seven years to Mance, Peery said he noticed that they undergo major changes in their relationship about every five years. As the evolution of the couple’s union demonstrates in this book, the challenges and rewards from a willingness to really listen to another’s point of view can invite us to put gender roles and other expectations in their proper perspective.

In well-described recollections of inner processes, Peery’s perceptions of the world began to change as he reconsidered many viewpoints and behaviors he once took for granted in the first half of his life. Indeed, his questioning of assumptions and sometimes harsh self-judgments at different points in his life starkly reflect times of uncertainty and confusion that ultimately helped him find ever-increasing clarity.

Peery arrives at this realization: If he is going to change how he related to his parents, other men, women and diverse populations, with an intention to collaborate and build relationships rather than from a position of competition or superiority, he is going to have to take inventory of who he is. His internal exploration included a more realistic appraisal of his strengths and limitations, and openness  to learning lessons that allowed him to mature with less ego and more grace. According to Peery, “what makes me a man is as much about how I make the journey as it is where I end up.”

Peery’s unfolding journey in So Dad, What Makes a Man answers his now-adult son’s innocent question well. His life story reminds us that self-awareness is a nobler path than some traditional male-oriented ways of imposing one’s will at all times or in attempts to control others, no matter the cost. In doing so, Peery has taken far more than baby steps to help advance the conversation about the role of men in society, and within their communities and families.

During the process of writing his memoir, Peery said, he found himself surprised by feelings stirred within him as people around the world began to march, occupy streets and seek change. He identified with the protesters’ general sense of feeling “enough,” and held some regret about the ongoing difficulties to change systems that involve abuse of authority, racism, war, violence and inequality on many levels of society. In examining these external situations and issues not within his control, Peery pushed himself to closely inspect things within his control. This path toward breakthrough is worth consideration for anyone frustrated by the status quo.

Based on what he refers to as “an uprising within me,” Peery’s discoveries about himself serve to remind readers that change starts within, and can extend a lifetime for those who want to become more flexible and fulfilled as human beings.

Peery’s book is among voices of reason due to its potential to encourage others to stop, think and reflect more deeply.  It may serve as testimony of the ripple effect of how when individuals grow and change, America as a whole may become more open to embracing fundamental changes.